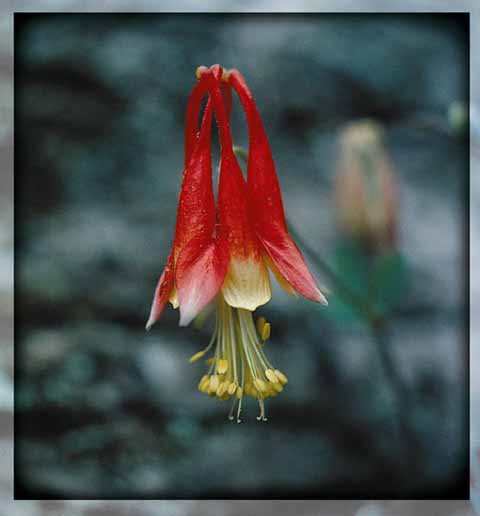 This columbine is an all-American plant, right down to its name.

Few plants have generated as much admiration as the American columbine. In fact, in a 1940s survey of hundreds of North American naturalists, the American columbine ranked as the seventh most popular native wildflower. Indeed, Europeans long ago admired its beauty and started importing the American columbine to their gardens in the early 1600s after John Tradescant, a noted naturalist of his time, first collected it. “Our columbine is at all times and in all places one of the most exquisitely beautiful of flowers,” wrote John Burroughs.

This perennial likes rocky cliffs or outcroppings and limy soils—it’s not unusual to find a clump of columbine growing from what seems like a handful of soil in a pocket on a huge boulder. “The early wild flowers seem to have selected the Columbines for their reception committee, and to have stationed them along the rocky balconies of woodland ridges during their spring festival, to extend a hearty welcome to all strangers who happen to pass,” wrote Frederic William Stack in Wild Flowers Every Child Should Know. Such stony surroundings emphasize the flowers’ charm but unfortunately have also encouraged some people to “rescue” it for their own gardens. “It contrives to secure a foothold in the most precipitous and uncertain of nooks, its jewel-like flowers gleaming from their lofty perches with a graceful insouciance which awakens our sportsmanlike instincts and fires us with the ambition to equal it in daring and make its loveliness our own,” wrote Mrs. William Starr Dana. “Perhaps it is as well if our greediness be foiled and we get a tumble for our pains, for no flower loses more with its surroundings than the columbine.”

Moved from a barren, rocky home to a crowded garden, American columbine loses much of its natural attractiveness and proper habitat.

Lest those who have never seen the American columbine (Aquilegia canadensis) confuse it with the garden varieties, there is no real comparison. “Although under cultivation the columbine nearly doubles its size,” wrote Neltje Blanchan, “it never has the elfin charm in a conventional garden that it possesses wild in nature’s.”

Nor do cultivated varieties, most of which descend from a European species, possess the color or elegant form of wild American columbine. No other wildflower east of the Rockies has the same scarlet color, brightened by a sort of translucence. The rich exterior is complemented by a bright, yellow interior and yellow around the mouth.

The color and unusual shape of the blossom are part of nature’s clever design, long in evolution. Each flower consists of five extended tubes or spurs that hold the nectar deep inside and away from most thieving insects. These tubes are longer in the native wild species than in the European or cultivated varieties. The common European wild columbine is blue, a color that attracts bees, which can easily reach into the shorter tubes to extract the sweets.

American columbine is red, a color that most attracts the ruby-throated hummingbird. Not coincidentally, hummingbirds are the only creatures that can easily sip the nectar from the flowers and, in so doing, pollinate them. The yellow opening and interior are said to guide the bird into the flower. Ms. Blanchan went so far as to suggest in 1900 that probably to the hummingbird “and no longer to the outgrown bumblebee, has the flower adapted itself.” Although some bees, wasps, and other insects cheat the system by nibbling through the nectar end of the spur, only the largest, strongest, and longest-tongued insects, such as bumblebees, can draw nectar from the tube.

Hummingbirds, incidentally, are not found in Europe, where the native columbine is designed for insect pollination. It is interesting to note, too, that many of the columbines of western North America are white, yellow, or blue—colors that don’t attract the hummingbird. These varieties use insects for pollination and consequently many have evolved forms more convenient for bees and flies. While American columbine is tubular, many western columbines are more open, with a display of beckoning petals. In addition, the western flowers are positioned horizontally, convenient to insects, while the American columbine dangles flowers upside down, which is fine for hummingbirds.

Several insects rely on the green parts of the American columbine for food and shelter. The larvae of two species of columbine leafminers (Phytomyza) eat serpentine “trails” through the leaves—consuming the flesh of the leaf and leaving mostly veining behind. There is also a columbine aphid, a columbine borer, and a columbine skipper. The last, Erynnis lucilius, is a kind of moth whose larva eats holes in the leaves. When it’s time to rest, the caterpillar rolls up a leaf like a sleeping bag and hides inside.

Few people who find this oddly shaped flower would guess it is a member of the Buttercup family and that it is closely related to anemones  and hepaticas, which bloom a bit earlier in spring than the columbine.

Aquilegia is a small genus of 50 species worldwide, but limited to north temperate zones. While Easterners have only one native, A. canadensis, more than a dozen species live in the West, particularly in the Rockies, where they find the kind of cold they seem to like. Colorado’s state flower is the Rocky Mountain blue columbine, A. caerulea.

Aquilegia may come from the Latin for “eagle” because of a fancied resemblance of the flower’s spurs to an eagle’s talons. Or it may be a combination of aqua, “water,” and lego, “to collect,” a reference to the nectar-holding spurs. A bird of peace, not of war, figures into the common English name. Columbine is from the Latin, columba, meaning “dove.” Some say the name stems from an imagined likeness of the flowers—probably of a European species—to a flight of doves. Others say the resemblance is to a circle of doves or pigeon heads, a design commonly painted on dishes and other circular objects long ago. Other folk names for the plant include culverwort (from the Saxon, culfre, meaning “pigeon,” and wyrt, “plant”), rock bells, rock lily, bells, meeting houses, cluckies, and jack-in-trousers—a name that sounds rather risque, and may well be.

Years ago New Englanders used to honor veterans, especially on Memorial or Decoration Day, by garnishing their graves with wild columbine and other flowers that would produce a red, white, and blue combination. Children, who used to call the flowers honeysuckle, would bite off the tips of the tubes for the sweets inside. At one time early in the 20th century, American columbine was touted as a candidate for the national flower. But there were less noble uses for the columbine. Giving a woman a bouquet of the flowers was a sign that her husband or lover was unfaithful.

The plant has some medicinal history, although few people today would think of ruining one to make a lotion for sore mouths or throats. “The seed taken in wine causeth a speedy delivery of women in childbirth,” wrote the English herbalist Nicholas Culpeper. The common European or garden variety (A. vulgaris) was once fairly frequently used in Europe for this and other ailments—until physicians found that children were being poisoned by overdoses of it and that other herbs served their purposes better and more safely.

Young Meskwaki Indians mixed ripe seed capsules with smoking tobacco to improve its smell. They believed the seeds smoked or added to a potion yielded a “love perfume,” handy when courting. Other Indians ate the roots and used the seeds in a tea for headaches and fever.

We might better use the seeds in establishing and spreading this uncommon perennial. Columbine favors dry rocky woods and outcroppings with a soil that has a pH of from 5 to 7.5 and that is not too rich. It spreads well from seeds, which can be gathered in July or purchased from wildflower nurseries, some of which also carry the plants. Columbine should never be transplanted from the wild unless threatened with certain destruction.

Remember to plant columbine in a situation similar to what it frequents naturally. “Nothing is daintier or more beautiful than the color effect of this graceful blossom among the gray rocks of a hillside pasture,” said F. Schuyler Mathews. And once it is established, you, too, might be able to feel a little of the healing properties that Ralph Waldo Emerson once described: “A woodland walk, a quest for river-grapes, a mocking thrush, a wild rose or rock-living columbine, salve my worst wounds.”