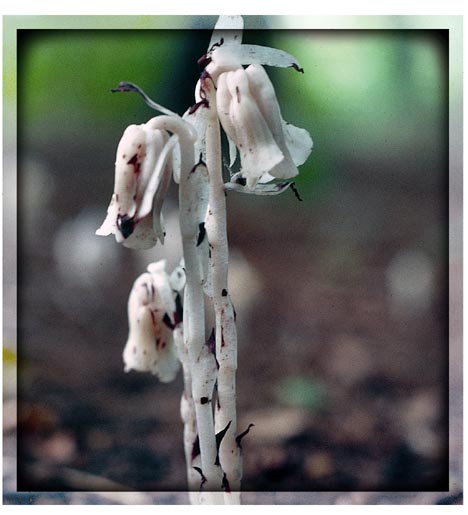 ‘Palpably ghastly’ to some, Indian pipe mystifies others.

Coming across a cluster of Indian pipes is an eerie, almost shocking experience. Ghostly and pale in the dark of the mid-summer woods, their freakish white flesh looks more like some oddly formed fungus than the wildflowers they are. This albino of the flowering plant world is somewhat closely related to the dogwoods, heaths, and even the evergreen laurels and rhododendrons. Like some of these cousins, Indian pipe has learned ways to take advantage of other life forms in order to live in places where few plants could survive.

The white or bluish-white, almost leafless plants bear a single five-petaled flower that, when young, faces downward. The shape of the plant resembles a clay pipe whose stem has been stuck in the earth, and the flower is not unlike the bowl. Scientists call it Monotropa uniflora, meaning “once-turned” and “single-flowered.” “Once-turned” refers to the fact that the flowers face the ground early in their life and then turn straight upward once they begin producing seeds.

The Indian pipe is a member of a tiny clan of two to four species – scientists disagree on the number. Only it and pinesap (M. hypopithys) live in North America. Indian pipe may be found from Maine to Florida, and from Washington to northern California. They also range across southern Canada and into Alaska.

Monotropa is in turn a member of the Indian pipe family (Monotropaceae), a small clan of 10 genera and 12 species, mostly found in the temperate Northern Hemisphere. They include the equally unusual pine drops, pigmy pipes, snow plants, and cone plants, none of which are very common.

The Indian pipe is strange not only in appearance, but also in lifestyle. Botanists at first thought it was a parasite, feeding directly off the roots of other plants. But Indian pipe’s own thick, brittle cluster of roots never touches those of other plants. Then scientists decided it was a saprophyte (from the Greek, “rotten plant”), living chiefly on the decaying parts of other plants, particularly trees. However, botanists now believe the plant is an “epiparasite” – a parasite that forms a relationship with another parasite to obtain its nutrients. Its roots employ certain mycorrhizal fungi in the soil to obtain food from live roots of green plants such as such as trees. The fungus connects the Indian pipe with the host roots by means of the filaments. Scientists have not yet figured out whether the fungus gains anything from its attachment to the Indian pipe -- it seems to serve only as a conduit between the tree root and the herb. However, botanist A. Randall Olson, a longtime fan and student of Monotropaceae, has come across an “obscure report from a botanist who died before he had a chance to publish his findings that phosphorus in some form may be transferred to the fungal partner.”

Though it may not look much like a typical blossom, the Indian pipe flower has most or all of the equipment found in typical flowers. It offers both nectar and pollen, and while little research has been done on the range of insects that will visit it, small bumblebees have been seen on the flowers. “I suspect that certain flies would not be out of the question either,” said Dr. Olson, who is head of the Department of Environmental Sciences at Nova Scotia Agricultural College. Dr. Olson said that while the flower has no scent discernable to humans, “the floral organs may be releasing other substances detectable to the insects alone.” What’s more, he said, while Indian pipe’s whitish color is bright to human eyes, insects may perceive colors that make the plant even more attractive, helping it to stand out like a beacon on the shaded forest floor.

Since it obtains all needed nutrients from other plants, Indian pipe doesn’t require leaves, the food-making factories that most plants possess. Thus, in the long process of evolution, only vestiges of leaves remain in the form of scale-like appendages on the stems. Nor does the plant need chlorophyll, the green chemical employed by most plants in using sunlight to create carbohydrates for food. Thus, the entire Indian pipe lacks any trace of green.

Indian pipes favor beech woods, but will live in others, and it is said that the best time to find them is after a heavy, soaking rain in mid-summer. They always live in shade, never in open sun. The roots send up shoots only when they are ready to bloom. Since they don’t need the sun to manufacture food, they don’t require a long season of above-ground parts. As soon as blooming and seed making is completed, the above-ground parts turn black and wither away.

The plant can’t be picked for display -- not that anyone would want it for a bouquet -- because Indian pipe’s flesh soon blackens when cut or even bruised, and oozes a clear, gelatinous substance. Its natural color and tendency to “melt” on picking earned it the name ice plant. Other names include like ghost flower, corpse plant, and wax plant. “This curious herb well deserves its name of corpse plant, so like is it to the general bluish waxy appearance of the dead,” wrote Dr. Charles F. Millspaugh. “Then, too, it is cool and clammy to the touch, and rapidly decomposes and turns black even when carefully handled.”

“It is the weirdest flower that grows, so palpably ghastly that we feel almost a cheerful satisfaction in the perfection of its performance and our own responsive thrill, just as we do in a good ghost story,” said Alice Morse Earle. Its common name comes, of course, from the shape of the plant and probably from the fact that it was first known as an Indian herb.

Pinesap, North America’s only other Monotropa, is a circumboreal species found throughout the Northern Hemisphere north of the tropics. In England, it’s known as the yellow bird’s nest, reflecting its tangled cluster of thick roots. Indian pipe’s roots are similar, and it’s been called nest root and nest plant.

Its use as a medicine has earned Indian pipes even more names. American Indians employed it as an eye lotion -- whence the name, eyebright -- as well as for colds and fevers. Americans of the 19th Century treated spasms, fainting spells, and nervous conditions with the plant and called it convulsion root, fitroot, and convulsion weed. Mixed with fennel, it was once also used as a douche.

Writing more than a century ago in The Botanical Gazette, Dr. R.E. Kunze told this story: “Fourteen years ago -- it was in the early part of July -- I went woodcock-shooting with two friends, near Hackensack, N.J., and while taking some luncheon in a beech grove along the course of Saddle River, I found a large patch of ground literally covered with Monotropa uniflora in full bloom; it covered a space some five feet wide by nine feet long, a beautiful sight of snow-white stems and nodding flowers. Being in need of some just then, I proceeded to fill my game-bag; and to the question, what it was used for, answered: ‘Good for sore eyes’; little thinking that the party addressed was suffering from a chronic inflammation of the eye-lids, the edges of which had a very fiery-red appearance. No sooner said than he proceeded to take in his game-bag a supply also, and he made very good use of it, as I ascertained afterwards. His inflamed lids were entirely cured in four weeks’ time, and he has had no further trouble since, by applying the fresh juice of the stems he obtained while it lasted.”

Because of their unusual appearance, Indians pipes are, once seen, never forgotten. I can remember finding them as a child on Nantucket Island and being told their name. That, the daisy, black-eyed Susan, and violet were probably the only wildflowers I could name till well into adulthood.

They are not the stuff of wildflower gardens. While Indian pipe produces seeds, gardeners shouldn’t be optimistic about having them germinate into flowering plants. Conditions must be just right, including the presence of the correct fungi. You can always try, but remember that the plants will need total shade in summer. Clarence and Eleanor Birdseye, the frozen food folks who wrote a book, Growing Woodland Plants, pointed out that it’s virtually impossible to transplant Indian pipe. That makes sense since digging up the plant would break its vital fungal connections with the host neighbors.

Nature writers who prefer showier plants have given Indian pipe some bad reviews. Explaining its colorless and parasitic qualities, Neltje Blanchan penned a lengthy “attack,” including: “No wonder this degenerate hangs its head; no wonder it grows black with shame on being picked, as if its wickedness were only just then discovered... To one who can read the faces of flowers, as it were, it stands a branded sinner.”  Arthur Craig Quick suggested that its ancestor was “an honest plant” that “must have been imbued by some evil genius with the idea that the world owed it a living…Forthwith it began its search for a way to get its living through the work of others.”

In shining groups, each stem a pearly ray

Weird flecks of light within the shadowed wood,

They dwell aloof, a spotless sisterhood.

No Angelus, except the wild bird’s lay,

Awakes these forest nuns; yet night and day,

Their heads are bent, as if in prayerful mood.

A touch will mar their snow, and tempests rude

Defile; but in the mist fresh blossoms stray

From spirit-gardens, just beyond our ken.

Each year we seek their virgin haunts, to look

Upon new loveliness, and watch again

Their shy devotions near the singing brook;

Then, mingling in the dizzy stir of men,

Forget the vows made in that clustered nook.

From a wicked degenerate to saintly nun: such are the extremes of the human imagination.