Branchville below the station 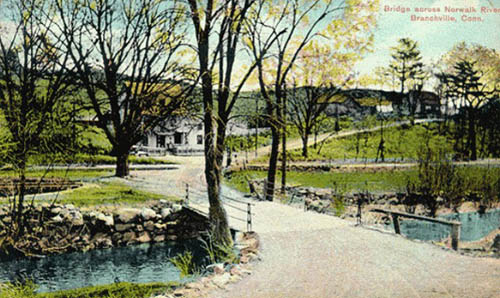 This view from around 1905 shows the bridge that crosses the Norwalk River at the south end of the Branchville railroad station parking lot. Just about everything in this picture is still there, except for some of the trees.

The photographer would have been standing in the middle of what's now Route 7 -- except that Route 7 didn't exist then. The main highway at this time was not on the west side of the river, but on the east side. You can see it in the background, going from left to right (or right to left!). That road today is variously called Old Main Highway or the crazy "West Branchville Road" (even though it's in the easternmost part of Branchville), and is on the east side of the tracks. It wasn't until the 1920s that the state moved the route to the west side of the river.

It's hard to see but the image does include the railroad tracks, just this side of the old main road.

The building in the background was the old Branchville General Store, now used by the Branchville Soho Gallery, which shows art there. The road going up the hill is Peaceable Street, leading into the Georgetown section of Redding.