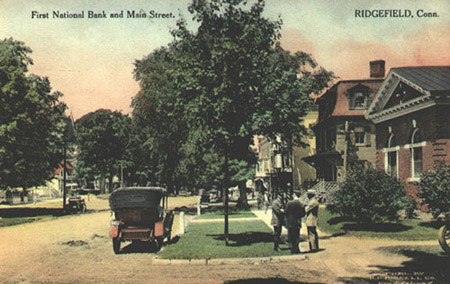 at Main and Governor Streets

This hand-colored card from around 1920 or maybe a little later, shows an unusual glimpse of Ridgefield life early in the 20th Century. Two of the fellows standing on the corner of Main and Governor Streets are chauffeurs, complete with caps and uniforms. They are chatting with a man in a straw hat (the late Francis D. Martin maintained that he was the straw-hatted man). Undoubtedly, one chauffeur belongs to the car at the left and the other perhaps to the automobile whose front wheel is just visible at the right. Ridgefield at this time had quite a few very wealthy families -- many of whom came up from the city for the summer -- and some had more than one chauffeur. In this case, they may have been driving their employers to the bank.

The First National Bank of Ridgefield, the brick building at the right, still stands today and, much expanded, belongs to big Wachovia bank chain. The building just beyond housed stores and apartments, and was moved to the east around 1930 to make way for the Ridgefield Savings Bank (now Ridgefield Bank) building that is now there. It was later torn down, around the time the Donnelly shopping center was developed.

Return to the postcard index.