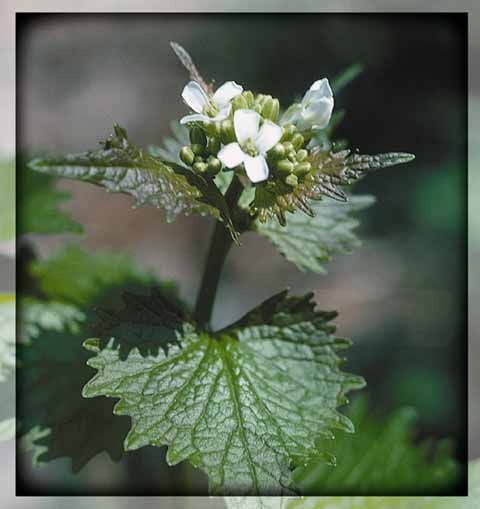 Lacking any enemies, garlic mustard has become one. Perhaps the answer is to eat it.

Like an alien army reeking of garlic, Alliaria petiolata has been marching across North America, reshaping woodlands and wiping out native wildlife. No less an authority than the U.S. National Park Service calls garlic mustard “a severe threat to native plants and animals in forest communities in much of the Eastern and Midwestern United States.”

When I began studying the wildflowers in my region of Connecticut around 1970, garlic mustard was an occasionally seen curiosity. Today, hordes inhabit many places where favorite May natives used to bloom. Garlic mustard shares the same territory and season as bloodroot, Dutchman’s breeches, spring-beauty, wild ginger, hepaticas, toothworts, trilliums, and others that suffer at its hands—or roots.

Species that depend on natives for food are also in danger. For instance, the National Park Service reports that garlic mustard threatens the West Virginia white butterfly (Pieris virginiensis). “Several species of spring wildflowers known as ‘toothworts’ (Dentaria), also in the mustard family, are the primary food source for the caterpillar stage of this butterfly,” the Park Service said. “Invasions of garlic mustard are causing local extirpations of the toothworts, and chemicals in garlic mustard appear to be toxic to the eggs of the butterfly, as evidenced by their failure to hatch when laid on garlic mustard plants.”

Because it is a vigorous biennial that relies on seeds to survive and spread, garlic mustard can quickly take over a piece of land and push out the locals.

How about grazing mammals? Alas, most animals dislike garlic, and the strong garlicky scent of this mustard’s leaves, especially when young, no doubt dissuade many herbivores from chowing down. For instance, white-tailed deer—which practically own the countryside where I live and will eat almost anything green, including evergreen needles—shun garlic mustard. Nonetheless, foraging deer probably help spread the plant, picking up seeds in their fur as they amble through stands of the herbs and unknowingly dropping them elsewhere.

A member of the large and often weedy Mustard family, garlic mustard is found throughout northern Europe and northwestern Asia, where it is known by such names as hedge garlic, sauce-alone, jack-by-the-hedge, poor man’s mustard, jack-in-the-bush, garlic root, garlicwort, mustard root, and penny-hedge. Some botanical historians claim to have traced its arrival in North America to 1868 on Long Island, probably brought over as a salad herb. By the year 1900, it was found from Quebec to Virginia. Its numbers then were not those of today, however, probably because the landscape a hundred years ago was much different from today’s. Wide-open fields and pastures covered most of the terrain, and garlic mustard, which shuns full sunlight, kept to the edges of the then less common woods or near hedges and other sources of shade. As many farms in the Northeast shut down and their fields reverted to woods or began sprouting housing developments, trees and shade became more widespread—and so did garlic mustard.

Because garlic mustard was a popular food and flavoring in its native lands, the plant may well have been here earlier than 1868. Its flavorful leaves, high in vitamins A and C, were often used in cooking. Maude Grieve reported that English country folk would add garlic mustard to sauces and salads. “The herb, when eaten as a salad, warms the stomach and strengthens the digestive faculties,” she said. John Gerard, the 16th-century herbalist, called the plant “sauce-alone,” and said the leaves were crushed and eaten as a sauce for salt fish. Edward Lewis Sturtevant reported that garlic mustard was often eaten with meat. In both cases, the strong garlic scent may have served not only to season the dish but also to hide the off-flavor of meat or fish that wasn’t fresh.

Garlic mustard has been boiled and served like spinach and, in Wales, fried with herring or bacon, much the way Italians still like to sauté dandelion leaves today. It was widely used in salads especially in England and Germany—where it was known as Sasskraut, or “sauce herb.” The Germans also call it Knoblauchsrauke, or “garlic cabbage.”

Alliaria petiolata has spread to North Africa, India, Sri Lanka, Australia, and New Zealand, as well as North America. In the United States, garlic mustard is most abundant in New England and Midwestern states, but it’s also well established as far west as North Dakota and Kansas, and south to Tennessee and North Carolina. The Nature Conservancy says populations began appearing in Oregon around 1974, and by the turn of the 21st century the plant has been identified in Washington, Utah, Colorado, and Idaho as well.

Although garlic mustard has been known over the last three centuries as Sisymbrium alliaria, Alliaria alliaria, and Erysimum alliaria, scientists seem to have settled on Alliaria petiolata. Alliaria is derived from allium, the Latin for “garlic,” while petiolata refers to the fact that the leaves have petioles, or stalks. Sisymbrium, incidentally, is an ancient Greek word for a fragrant plant and was applied to watercress, the popular salad herb; garlic mustard is closely related to the cresses.

The mustards (Brassicaceae) are a worldwide family of more than 200 genera and 1,800 species. More than 40 genera and 100 species are found in North America. They are distinguished by their four-petaled flowers that usually appear as a cross—the family was once known as Cruciferae, a word based on the Latin for “cross.”

Garlic mustard’s small, white flowers bloom in small clusters atop a stalk that’s one to three feet tall. The flowers can be insect pollinated or can self-pollinate, and produce many long, slender pods full of seeds that have a high rate of success—necessary in a biennial. In the first season of its life, garlic mustard is limited to a basal rosette of kidney-shaped leaves, which build up the strength in its roots to produce the tall, flowering “adult” in the second year.

The plant is very difficult to eradicate since it has so much working in its favor. It lacks natural enemies, can self-pollinate, and produces many seeds. What’s more, the seeds—or “seed bank,” as the botanists call the accumulation of several years’ worth of seeds—can last years.

The simplest method of attack is to chop down garlic mustard whenever and wherever you see it. At the least, pull up the plants—which is not difficult. Your attack needs to be continuous because garlic mustard seeds can germinate many years after you’ve eliminated the parents. Forest and natural resource agencies resort to herbicides and controlled burning to kill them off, but even fires are ineffective unless the leaf mold, where seeds lurk, is also burned.

In 1998, the Departments of Natural Resources in Minnesota, Illinois, Indiana, and Kentucky, plus a half-dozen other agencies, commissioned a Swiss company to find a biological control for garlic mustard. Of 69 insects and seven kinds of fungi associated with the plant in Europe, six insects, including beetles and weevils, were selected for close study as possible biological agents. Five were “monophagous,” meaning they feed on only one kind of food—in this case, garlic mustard. Of course, an insect that eats only one species in Europe may find, upon being introduced into North America, that other plants it has never met are equally tasty. That’s why studies of this kind have to be very careful and extensive—otherwise, we may be importing a creature as damaging as the plant it’s supposed to control.

Even with an invasion of garlic-gobbling insects, this plant will probably never be eradicated. However, the more we ourselves kill them—and the more we encourage others to do likewise—the more native species that will be able to survive. In the process, we might even get some nourishment. Correspondent Phil Corbett, who lives in England, where garlic mustard is not a problem, reports that while the leaves of mature plants can be bitter, young sprouts are tasty. “I’ve found that the seeds can be germinated to give one of the best tasting cresses you’ll ever eat—sweet and mildly garlicky,” he said. “Maybe mass seed collection could be a commercial solution!”

In other words, help your environment—eat its enemy!