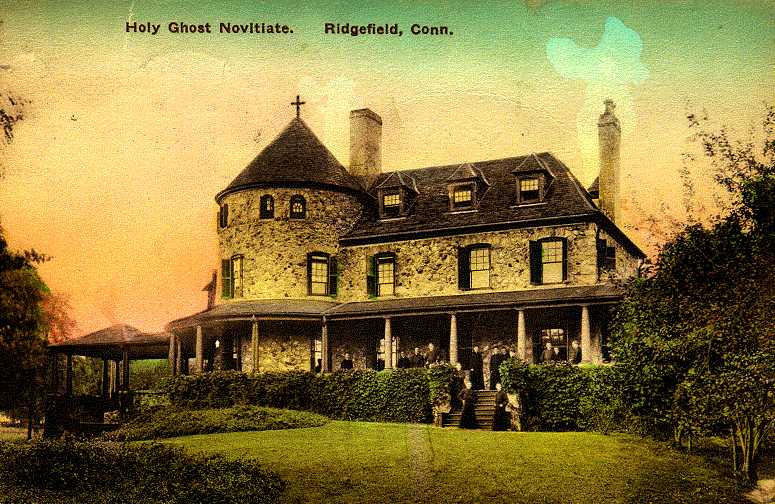 From the 1920s until the early 1970s, the Holy Ghost Fathers operated a novitiate on Prospect Ridge. This hand-colored (and, alas, stained) postcard from the 1920s shows some of the novices -- students for the priesthood in the order -- on and about the porch.

Holy Ghost priests and brothers do missionary work and teach in schools around the world. Because of dwindling vocations in this country, however, this novitiate was shut down and sold to the town in 1971. While the order still has a problem finding new members in this country, it is still very popular in other parts of the world, such as Ireland.

The building shown here was originally a house, built of stone by the Cheesman family around 1888. The Holy Ghost Fathers added a huge, three-story stone wing off the back, housing classrooms, dormitory rooms, a chapel, and a cafeteria. When the town bought the place, it gave the building to the Board of Education, which moved its administrative headquarters here for many years. In the late 1980s, the building was added to and turned into congregate housing for the elderly. Outbuildings on the property are now used by the Marine Corps League, the Ridgefield Guild of Artists, and the Ridgefield Theater Barn. Portions of the 26 acres that came with the purchase have become athletic fields, sites for affordable housing, the Bark Park, and the community gardens. Halpin Lane serves many of these buildings.