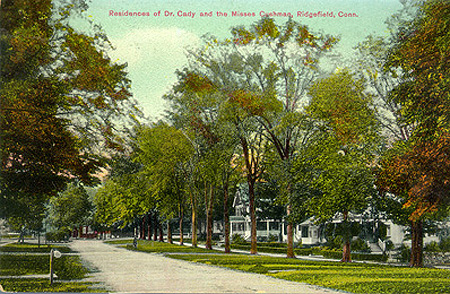 This view, entitled "Residences of Dr. Cady and the Misses Cushman, Ridgefield, Conn.," looks northward on Main Street from about opposite the intersection of Rockwell Road. The scene is around 1910 and Main Street, of course, is still dirt surfaced.

Dr. Philander Cady once imported a species of bamboo from the Orient that quickly escaped and spread around the village. The bamboo was sharp enough to tear one's flesh and became known locally as Cady-weed. Dr. Cady's brother, J. Cleveland Cady, designed the First Congregational Church across the street from the house (not visible here). The house was owned in the 2000s by TV and movie actor Giancarlo Esposito.

At the very end of the street is where the Fountain was later erected, and beyond it -- barely visible in red -- is the Corner Store that stood at the intersection of Main Street and West Lane, across from the First Congregational Church.

Back to the postcard index.