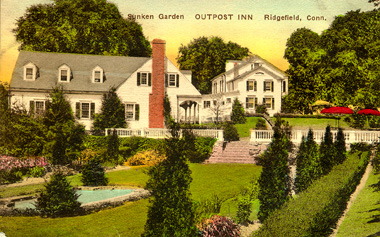 The Outpost Inn stood on the site of today's Fox Hill condominiums on Danbury Road. The inn was established in 1928 by Col. Louis D. Conley, who owned Outpost Nurseries, more than a thousand Ridgefield acres of plantings that went to some of the fanciest estates in the Northeast (including Franklin D. Roosevelt's Hyde Park and the 1939 World's Fair). The inn was centered around an antique house (upper right) and was a place of elegant food and fine accommodations through the 30s, 40s, and 50s. Below is a view of the entrance hall, part of the original house built by Albin Jennings for his bride in 1816. 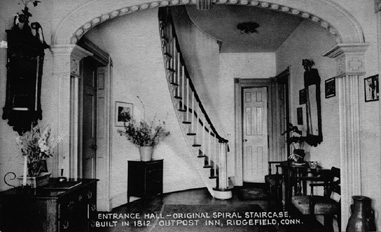 In the early 1960s, the Shapley School, a private prep school, acquired the property. The school -- plagued with drug problems -- soon failed and, in 1968, David L. Paul, developer of Casagmo apartments on Main Street, bought the 28 acres. He'd planned to use the main house as a community building for the condominiums, but vandals torched it and Paul tore it down. (In the 1990s, David Paul headed a big Miami bank that collapsed, and he wound up in prison.)