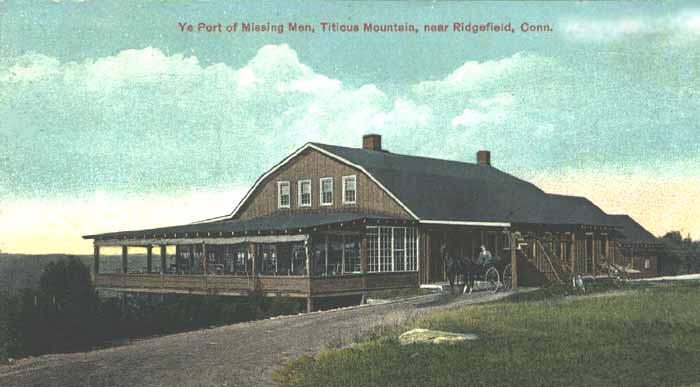 The Port of Missing Men

The Port of Missing Men was a hunting, fishing and dining resort on Titicus Mountain, established around 1908 by Henry B. Anderson and including some 1,750 acres in Ridgefield and Westchester County, N.Y. Anderson originally acquired the land with the though of creating a development of mansions for wealthy New Yorkers, but soon abandoned that plan and turned to a resort instead.

This building was the restaurant and headquarters. It overlooked miles of countryside and was situated on the north side of the road in North Salem, N.Y., that is the western extension of Old Sib Road in Ridgefield. It was close to the Ridgefield line, and many Ridgefielders were involved in operating the place.

The operation catered to wealthy New Yorker sportsmen who wanted to spend time in the country. When Prohibition arrived and liquor could not be served, the place became known as "Anderson's Tea House."

The name of the place came from a popular 1907 novel of the same title by Meredith Nicholson. At one point in the novel, Armitage, the hero, is hiding out in Virginia for political reasons. As he arrives at a secluded hunting lodge, his companion says, "Here is what they call the Port of Missing Men."

"Why the name?" asks Armitage.

"There were gray soldiers of many battles ... who fought the long fight against the blue soldiers in the Valley of Virginia, and after the war was over, some of them would not surrender -- no; but they marched here, and stayed a long time, and kept their last flag, so the place was called the Port of Missing Men."

Novelist Mary-Ann Tirone Smith, then a Ridgefielder, chose The Port of Missing Men as the title for her 1989 novel about an Olympic swimmer. But the name in her book referred to an ocean liner.

In the early 1950s, a group of New Yorkers bought much of the property and subdivided the Ridgefield portions into the Eight Lakes development. Hundreds of house lots were created. Some 10 miles of Port of Missing Men trails and paths, many of them created by early Italian immigrants working for Henry Anderson, became subdivision roads and new ones were added. The roads include Walnut Hill Road, Birch Court, Rock Road, Scott Ridge Road, Blue Ridge Road, Caudatowa Drive, Sleepy Hollow Road, Round Lake Road, First through 12th Lanes, part of Mamanasco Road, and the western portions of both Barrack Hill and Old Sib Roads.

At times during the 1950s, as many as 20 salesmen for Eight Lakes were working in town over weekends, selling houses and lots in the development.

The name, Eight Lakes, comes from the number of lakes and ponds encompassed or touched on by the Anderson property in both states: Lake Mamanasco, Turtle Pond and Round Pond in Ridgefield; Lakes Rippowam, Oscaleta and Waccabuc in Lewisboro; and two small man-made ponds -- one once called Pine Lake -- in the woods of North Salem.

Most of the New York acreage is now woodland, part of the Mountain Lakes Park belonging to Westchester County.