Built in the early 1700s by the Stebbins family, this saltbox stood at the head of Main Street where the entrance to Casagmo condominiums now is. During the Battle of Ridgefield, the house served as a hospital for patriots wounded while fighting the British. The house itself was riddled with bullets and its front door, complete with bullet holes, is now held by the Keeler Tavern.

Here's a view of the house as one looked north along Main Street in the 1880s from in front of The Elms Inn. The house stood right by today's entrance to Casagmo: 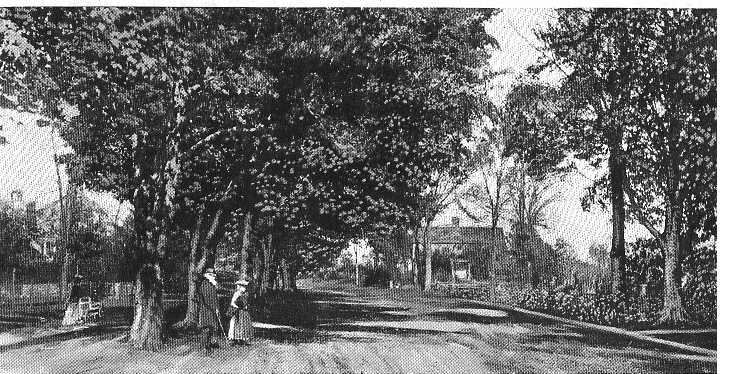 In the stone wall near the Casagmo entrance today, shown above at right, is a plaque that notes a burial ground near what was the front yard of the Stebbins place: "In defense of American Independence at the Battle of Ridgefield April 27, 1777, died Eight Patriots who were laid in these grounds, companioned by sixteen British soldiers. Living, their enemies, dying, their guests. In honour of Service and Sacrifice this Memorial is placed for the Strengthening of Hearts."

Back to the picture index.