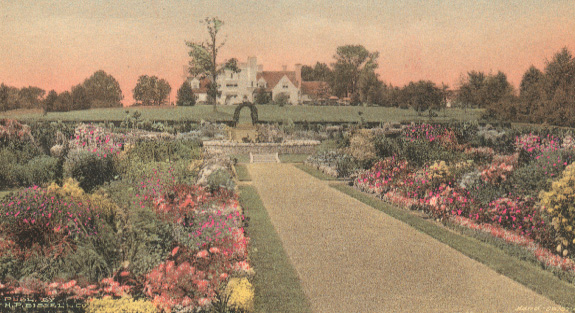 One of Ridgefield's most magnificent -- and in several senses, colorful -- estates was Upagenstit, built by express company president Frederic E. Lewis early in the 20th Century.

Called "Upagenstit" as a joke, the estate ran along West Lane opposite Olmstead Lane and between High Ridge and Golf Lane. It required a staff of up to 100 people to run and included extensive greenhouses, stables, barns, houses for staff, and even a glass-enclosed natatorium (indoor swimming pool).

In the 1930s, Upagenstit became the home of Eli Culbertson, an international revolutionary and one of the most famous bridge players -- and bridge columnists -- of the century.

Eventually, Culbertson went broke and during World War II, the estate became Grey Court College for women, an institution that lasted only a few years.

In its finally years, Upagenstit was a resort. The last operators, a labor organization, were said to have strong Communist ties, and the operation was investigated by various agencies without much result. However, a Ridgefield native who grew up near the estate and wandered the property as a boy remembers coming upon, as a kid, a barn where huge pictures of Josef Stalin were mounted on a wall.

The mansion was razed in the mid-1950s, and the estate turned into the Ridgefield Manor subdivision. Many of the specimen trees were retained, and some today are among the most magnificent trees in the town. This view looks northerly from around what would be the intersection of Manor Road and Fairfield Court today.

To learn more about Frederic E. Lewis and his children, and Ely Culbertson, see the Ridgefield Who's Who.