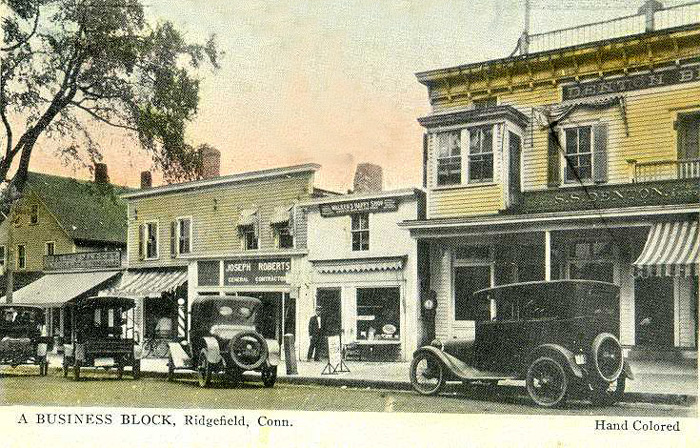 This postcard from the late 1920s shows the stores along the east side of Main Street, opposite Planet Pizza. In the center is Walker's Happy Shop, a wonderful name for a place that made many a kid happy. Charles Wade Walker, a local musician, sold candy, ice cream, magazines, newspapers, novelties, and other goodies here in the 20s and 30s. The store featured a popular soda fountain. Mr. Walker was organist for many years at the Methodist Church, then across the street. He was also a justice of the peace, a prosecutor in the town Justice Court, village traffic officer, a constable, and a volunteer fireman. And if that wasn't enough, he belonged to the Masons, Odd Fellows, Lions, and Grange.

At right is Samuel Smith Denton's block of stores, shown painted yellow on the second floor. Notice the projecting addition toward the north end of the Denton second story; that was part of Denton's own office, and allowed him to look up and down Main Street to see what was going on in the village.

You can learn more about both Walker and Denton at our Notable Ridgefielders site.