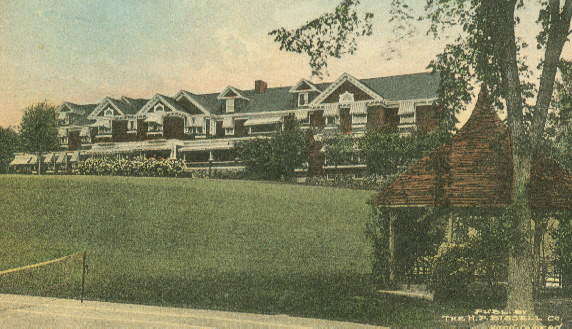 The home of Albert H. Wiggins is pictured in this hand-colored postcard from around 1920.

The house, located on the south side of Peaceable Street west of High Ridge, still exists, though it's somewhat smaller -- much to the right of the chimneys was at some point removed, apparently because the house was just too big.

Albert H. Wiggins was head of the Chase Bank in the 1920s, a period when Chase became literally the biggest bank in the world.  He was later labeled a "scoundrel" after federal investigations revealed he had manipulated Chase stock to his own advantage, but not the stockholders', during the period of the 1929 Crash.

From the 1970s to the late 1990s, it was the home of A. Raymond Bessette, the man who almost single-handedly created the skating rink on Prospect Ridge.