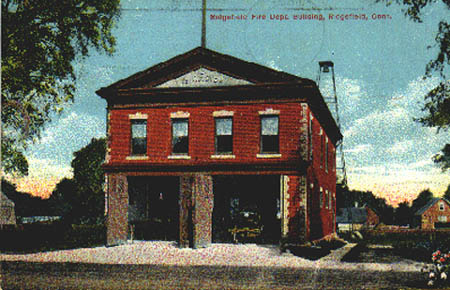 The headquarters of the Ridgefield Volunteer Fire Department was built in 1908 on Catoonah Street. The tower shown in the back, long gone, held the fire bell.

After the great fire of 1895, which destroyed much of the commercial village of Ridgefield, the town fathers and some of the wealthy landowners agreed major safety improvements were needed. One was the establishment of a fire department, which was originally housed in the new town hall. Another was a water system, which was created around 1901 and supplied the village so that enough water would be available to fight fires (as well as serve household needs). The firehouse has been added to many times over the years, but its core looks essentially the same today when it houses both paid professional firefighters and the volunteer force. (A second fire station is located in Ridgebury.) However, town fathers have long discussed building a new main headquarters elsewhere to avoid the traffic tie-ups that sometimes occur in connection with the busy Catoonah and Main Street intersection.