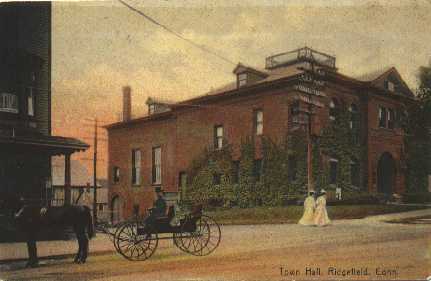 The current brick town hall was built in 1896-97 after the Great Fire of 1895 destroyed its 20-year-old wooden predecessor and many other buildings in the village. The town hall was not only the seat of local government, but the front offices on the first floor served as the headquarters of the Ridgefield Savings Bank and the First National Bank in their early years. Early in the century, the town hall was also a movie house, a lecture hall, a basketball court, and a dance hall. This view dates from around 1907 (the postmark is 1910).

Notice the large door on the back of the town hall (between the horse and the carriage). That was where the Ridgefield Volunteer Fire Department kept its horse-drawn engine in the years until 1908 when the firehouse on Catoonah Street was erected. The building at the left is the old D.F. Bedient's general store, which closed in 1998, ending more than 200 years of operation under various owners and names. It now houses clothing and other shops.