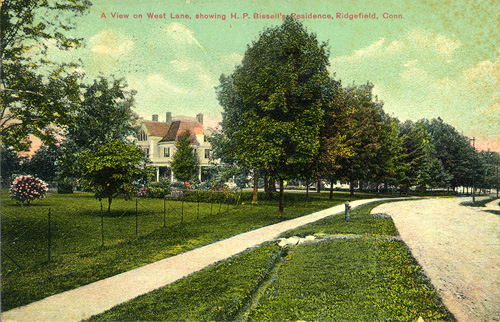 This view from around 1915 shows West Lane, from near the intersection of Parley Lane, looking eastward toward Main Street and the fountain (which had not yet been erected when this image was taken).

The hand-colored card shows the home of Harvey P. Bissell, who was a pharmacist. In fact, Bissell's Pharmacy is still operating on Main Street, a century after it started. An active politician and friend of Ridgefield's Phineas and George Lounsbury, who were both governors, Bissell was elected comptroller of the state of Connecticut early in the 20th Century. Two weeks before the president's death in 1923, Warren G. Harding named him collector of customs in Connecticut. Harding's aunt lived just down the road -- see the link below.

Bissell's house is now The West Lane Inn, whose accommodations are highly rated by the AAA. Many famous people have stayed there -- including President Jimmy Carter.

The road, of course, was still dirt, but the sidewalk -- still extant -- appears to have been paved.

Just beyond this house was the home of George Pratt Ingersoll, a New York City lawyer appointed by President Woodrow Wilson as U.S. minister to Siam. He once entertained the prince of Siam here.

For a view in the exactly opposite direction, click here.