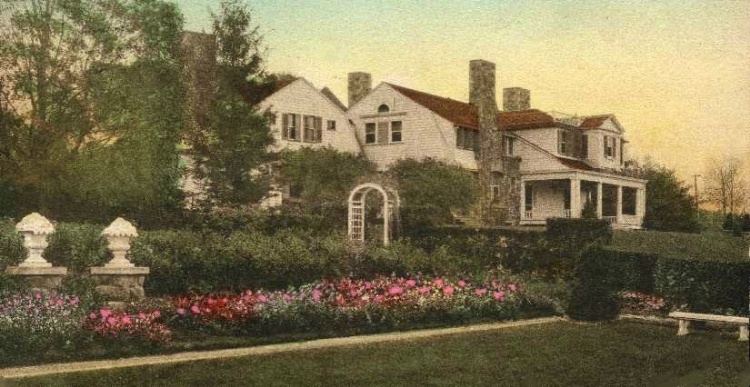 One of the more interesting personalities to live in Ridgefield at the turn of the 20th Century was John Ames Mitchell, whose West Lane estate (above), called Windover, still stands a little west of the old West Lane Schoolhouse.

Mitchell founded the original Life magazine, which he published from the 1890s until his death in 1918. He was also a novelist, the most famous of his tales being Amos Judd (1895), which was made into a 1922 silent film, The Young Rajah, starring Rudolph Valentino.

Mitchell established the Life Fresh Air Camp in Branchville, which brought city kids to the country for many years. It was located where Branchville School is now.

He also donated the watering trough that now stands in the triangle of West and Olmstead Lanes, but which once stood in the middle of Main Street in front of the town hall. The trough served the needs of not only horses, but dogs -- a special opening at the bottom provided refreshment for passing canines in an era when roaming dogs were as natural as roaming people.

Mitchell's Life magazine headquarters is now the Herald Square Hotel in New York City. The hotel is owned by Abe Puchall, a Mitchell aficionado who not coincidentally lives in Windover. He had previously lived in the Windover carriage house at the corner of West Lane and South Salem Road.

You can read more about John Ames Mitchell in Notable Ridgefielders.

Right across the road from Windover, at the intersection of West Lane and South Salem Road, is the Little Red Schoolhouse.